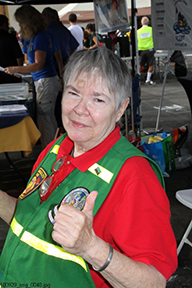 Linda’s primary focus by the year 2007 was emergency preparedness, and she became the chair of the EP Committee, a position she maintained (as chair and later co-chair) until her death. She became known citywide for her efforts to prepare for “the Big One,” and other Neighborhood Councils have followed her lead. One of her biggest accomplishments was her motion to spend the equivalent of an entire year’s budget ($50,000.00) to stock two containers filled with search and rescue equipment, triage, and medical supplies to serve the community of Lake Balboa in the event of a disaster. Although the City opposed her motion, she gathered support and won. These two containers still remain in Lake Balboa, filled with emergency supplies, as monuments to Linda.

In 2007, Linda co-founded the Southern California Preparedness Foundation, a 501c(3) organization of which she was the Corporate Secretary and Director. The mission of that organization is to promote and support disaster awareness, education, and preparedness by means of community events, such as the annual Valley Disaster Preparedness Fair. She also promoted outreach efforts such as Map Your Neighborhood, which encouraged stakeholders to prepare to deal with emergencies on a very local level.

Linda was trained as a CERT (Community Emergency Response Team) 3 responder, and encouraged everyone around her to take that training. She was responsible for graduating the largest CERT class in Los Angeles.

She also served as Preparedness Advisor on the West Valley Community Police Advisory Board.

On March 21, 2011, Assemblyman Bob Blumenfield honored Linda’s devotion to emergency preparedness during the California State Assembly’s Woman of the Year ceremony at the State Capitol in Sacramento.

Linda’s background was in business. She was the founder of Text Management Services, Inc. (“TMS”), the first full-service word processing service bureau on the West Coast, and served as its President and CEO for nearly thirty years before retiring. TMS became a publishing company and produced technical manuals for the aircraft and aerospace industry throughout the world.

Linda was also a Co-President of the San Fernando Valley Chapter of NOW, the National Organization for Women, and a staunch supporter of women’s rights and minority rights. In 2008, Proposition 8 was a California ballot proposition and state constitutional amendment which was intended to ban same-sex marriage in California. The campaign opposing Proposition 8 sought to have local government agencies, including Neighborhood Councils, go on record in opposition to it. A volunteer from the anti-Prop 8 campaign (who is now coincidentally a member of the LBNC) lobbied the LBNC to announce its opposition to Prop 8. Led by the then-President of the LBNC and Linda, the LBNC voted unanimously to oppose Prop 8, making it one of the leading Neighborhood Councils in the City in the forefront of this important civil rights issue.

Linda will be greatly missed by the LBNC. She has left an incomparable legacy for this community. 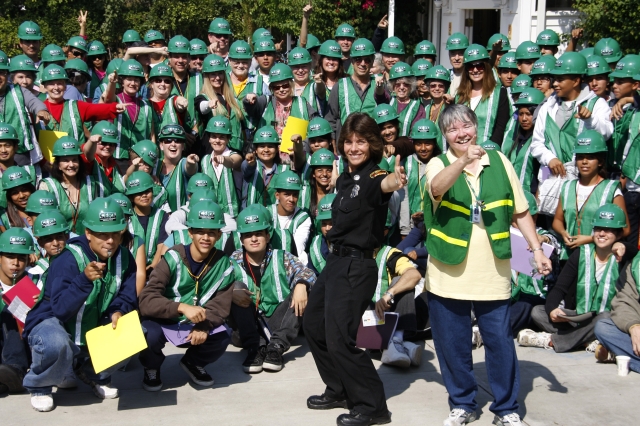 The 13th Annual Valley Disaster Preparedness Fair is being held this year in recognition of its Founder, William (Bill) Hopkins, Jr., and his wonderful wife, Linda. Bill passed away just a few months ago, and Linda several years ago.

Bill's background in disaster and emergency preparedness was extensive. He was the Founder and Chair of the Granada Hills North Neighborhood Council Emergency Preparedness Committee, and he took pride in its monthly meetings (all open to the public), with varied and interesting presentations and classes. He was the prime mover in starting the annual Valley Disaster Preparedness Fair, which grew to be the largest event of its kind in Los Angeles, and the founder of the Southern California Preparedness Foundation, which organizes the Fair and other preparedness events. He insisted that the Fair be free to all – attendees and exhibitors alike, to encourage full community participation in this important and informative event.

Bill was also a Community Emergency Response Team callout member (CERT Level 3) with the Los Angeles Fire Department. He was a Map Your Neighborhood (MYN) instructor and an American Red Cross volunteer and instructor and at one time led its Disaster Action Team (DAT). He held an Amateur Radio license for over fifty years and was a Volunteer Examiner for FCC license examinations. He was a member of the Amateur Radio Emergency Services (ARES) group, the Los Angeles County Disaster Communications Service (DCS), and the Los Angeles Fire Department Auxiliary Communications Service (LAFD ACS).

In 2016 Bill received the George Washington Honor Medal from Freedoms Foundation of Valley Forge, Los Angeles Chapter. He received the Granada Hills Chamber of Commerce 2017 Gil Benjamin Citizen of the Year Award. Southern California Preparedness Foundation, of which he was Founder and President, received BICEPP‘s (Business & Industry Council for Emergency Planning & Preparedness) Award of Excellence in 2018.

Bill and Linda were never blessed with children, but a closer relationship between a couple you couldn't find. Linda was Bill's inspiration, right arm, executive secretary and research staff, and the glue that held him together; she kept him and his work sane and organized through all the many projects he fathered and developed. Her untimely death shocked all who knew and loved her, and Bill never really recovered from it.

It is, therefore, with sincere appreciation, great pride, and deep affection that we honor them both by naming this event The Linda and Bill Hopkins 13th Annual Valley Disaster Preparedness Fair.